Apparently the British cartoon-curse differently than we do. Check out this sign (which accompanied a story about a woman who hid her illiteracy for 40 years): 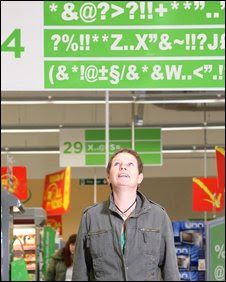 Craig Conley asks the important question, though. Why are Zs, Js, Xs and Ws considered dirty letters? Is there something we don't know about?

Posted by Martha Brockenbrough at 3:33 PM No comments:

Thank you (we mean thank-you) to Peyton M. for this one:

The John McCain 2008 Presidential Campaign is looking for interns for positions available immediately in our Arlington, Virginia headquarters.

In addition to giving you real-world work experience, this program provides an opportunity to participate in the most exciting presidential election in history! Campaign Internships are unpaid and participants are responsible for arranging their own transportation and housing.

Interns will work with staff on various projects essential to the campaign and play a significant role in Senator McCain’s campaign.

Interested candidates should send a resume and cover letter (with availability) to: Volunteer2@JohnMcCain.com

Where is Jessica Simpson's Question Mark? 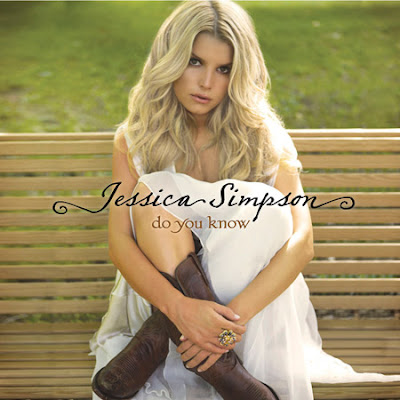 Do you know? She's asking. At least we think she is. And who can refuse a nice pout like that?

Posted by Martha Brockenbrough at 7:55 PM No comments:

Here's my latest on Encarta:

Since I received a matched set of decade-appropriate teal suitcases for high school graduation, I've had an unholy obsession with luggage.

For at least as long, I've also had an indecent interest in the lives of celebrities. Now, the realization that my favorite kind of word is also a type of suitcase and it has to do with celebrities is almost more than I can bear.

In the world of suitcases, a portmanteau is a stiff leather case that hinges open to reveal two equal-sized storage compartments.

As great as this is, the word-nerd's version is even better. A portmanteau is a hybrid of two other words that carries the meaning of both. The word itself is even a portmanteau, as it comes from the French word "porter," meaning "to carry," and "manteau," a "cloak or mantle." Sigh.

And talk about celebrity baggage ... it's there, too, in the form of TomKat, Gyllenspoon and even Bennifer.

Have a favorite portmanteau of your own? SPOGG is having a contest. The best one wins a prize from the SPOGG shop. Send your entries to contest@spogg.org.

Posted by Martha Brockenbrough at 11:30 AM No comments:

It's probably not the "weeding" cake the bride and groom dreamed of, but it's better than what "Bunjaminoh" had to eat on his birthday.

Click here to see the wreckage of professionally decorated cakes gone wrong.
Posted by Martha Brockenbrough at 1:54 PM No comments:

New Words on the Internets

Remember Chris Crocker, the extensively made-up guy who wept in defense of Britney Spears? (If you haven't seen the video, you can find it here. Be warned, though. His language is less pure than the driven snow.)

In any case, Chris Crocker is now on Facebook, where we just discovered an interesting new hyphenate: self-portraist.

Website: http://www.youtube.com/itschriscrocker
Personal Information: "With over [sic] 116 Million video views [counting both Myspace and Youtube]- [sic] I am THE most watched [sic] video self-portraist on the internet [sic]."
Personal Interests: Britney

Self-portraist. Does this mean one who portrays himself? As opposed to an actor or actress playing a role? We would have used "person" in the same place. But maybe Chris Crocker is shooting for something more than being just a person. Should we leave...(sob)...Chris Crocker...(sob)...alone? Nah. We will let you know how he responds to a stern letter.
Posted by Martha Brockenbrough at 7:57 AM No comments:

We just got this spam in our inbox:

Waste no time on useless exercise to gett of some kilos, there is better way.

Now, we could translate this into English, like so:

We could. But we will resist that urge. It isn't very often a spammer has such grammar that nearly every word is either misspelled, awkward, or both. It's pure genius. If we were a fat man, we could hardly resist trying the pilules, just to see what crazy magic might occur.
Posted by Martha Brockenbrough at 4:28 PM No comments:

How Not to Be Annoying

Apparently e-mail is the No. 1 means of annoying your co-workers. Perhaps even more annoying than stealing lunch. "Action News" (a name we love almost as much as we'd love "Inaction News") reports on the many ways one can e-grate.

We couldn't help but notice this word of caution from an etiquette expert:

For Pamela Eyring, the owner and director of the Protocol School of Washington, correct grammar and punctuation--whether it's avoiding the all caps curse or using spell check--is essential.

"When you're doing e-mails, the first thing you have to remember is that your e-mails reflect you," Eyring says. "So that e-mail courtesy is just like writing someone a letter: [You need] correct grammar, spelling and punctuation.

While it isn't scientific proof that bad grammar is annoying to encounter at work, we'll take it. (Read more.)
Posted by Martha Brockenbrough at 5:40 AM No comments:

Mondegreen has finally made it into the dictionary--a mere 54 years after it first appeared in print.

This comes from the AP story about new additions to Merriam-Webster's collegiate dictionary.

And then there's "mondegreen." In a category of its own, it describes words mistaken for other words. A mondegreen most often comes from misunderstood phrases or lyrics.

It comes from an old Scottish ballad in which the lyric "laid him on the green" has been confused over time with "Lady Mondegreen."

Among the best-known modern examples: "There's a bathroom on the right" in place of Creedence Clearwater Revival's "There's a bad moon on the rise" and "'Scuse me, while I kiss this guy" in place of "kiss the sky" in the 1967 Jimi Hendrix classic "Purple Haze." [NOTE: WE THINK "WRAPPED UP LIKE A DOUCHE IN THE MIDDLE OF THE NIGHT IS FUNNIER THAN THESE EXAMPLES. CAN YOU NOT SAY "DOUCHE" IN A FAMILY PAPER?]

Mondegreen, first spotted in print in 1954, was among tens of thousands of words the wordsmiths watched for decades. That and others make the cut for the dictionary based on how widely they are used in publications ranging from newspapers to technical manuals.

We consider this a good thing, especially because "mondegreen" appears in our forthcoming book, Things That Make Us [Sic], along with a host of other things that might not have made the dictionary, including lolcat (we study the rules of this particular brand of kitty-pidgin).

We reviewed the index this morning; here is a partially marked-up snippet for the "egregious errors" entry:

We hope that makes you want to buy the book. It comes out in October, but you can order it in advance and save 32 percent. (At SPOGG, we are thrifty as well as grammatical.)
Posted by Martha Brockenbrough at 9:24 AM No comments:

Microsoft's search team is offering to pay people to use their product. We have no objection to that, even if it sounds a wee desperate.

Cash back is TWO words. Did they disable their spell-check? The only "cashback" we know is a pink piggy bank with a slit on his spine. We wouldn't object to being stuffed with money, but it would be so hard to reach back there that it couldn't possibly be worth the special post-surgery wardrobe.

In any case, this is the second time Microsoft has been stingy with the space bar. Remember when MSN was more useful "everyday"? Goodtimes. Forsure.
Posted by Martha Brockenbrough at 7:18 AM No comments:

We have a small quibble:

DOVER, N.Y. -- Two teenagers who drove to Oniontown after a series of YouTube videos portrayed the hamlet as a run-down, backwoods dump were pelted with rocks by an angry group of young residents, authorities said.

The two 17-year-olds from Mahopac, about 30 miles south of Oniontown, suffered head and face injuries.

Troopers arrested a 17-year-old from Oniontown on Thursday and charged him with criminal mischief. Additional arrests were expected, police said.

"The biggest recommendation at this point is for everybody to stay out of there," Schaefer said. "Anybody that doesn't belong there, anybody that's not a resident, just stay out of Oniontown."

No, we're not going to make fun of Oniontown. We don't want anyone throwing rocks at us. Though, it does seem a bit run-down and backward to pelt outsiders with rocks. If you want to prove your sophistication, you should throw purebred cats, or maybe designer cheese. But that's not why we posted this.

Rather, we wanted the sheriff to know he should say "who" instead of "that" when he's talking about people. Even if they don't have a fancy Oniontown address, they're still people.
Posted by Martha Brockenbrough at 2:02 PM No comments:

Labels: who vs. that

We felt it imperative to point out a missing apostrophe on the home page of our local paper's Web site.

We're out of sorts. Not were.

That said, a movie about the Founding Fathers being werewolves could be really cool. They didn't just want democracy; they wanted freedom from the King and his endless supply of silver bullets. Aroooo!

Anyway, we feel better having called this apostrophe catastrophe to your attention. This is ever so much more useful than wearing a flag pin, however attractive those might be.

Posted by Martha Brockenbrough at 7:37 AM No comments:

Some Things Are Self-Explanatory 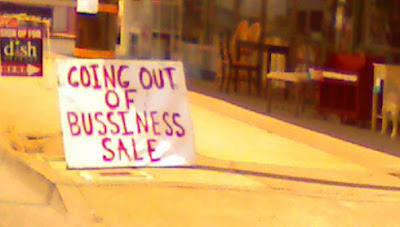 If they cook as well as they spell, we understand why things didn't go their way.

Thanks to Charles D. for the contribution.
Posted by Martha Brockenbrough at 4:59 PM No comments: