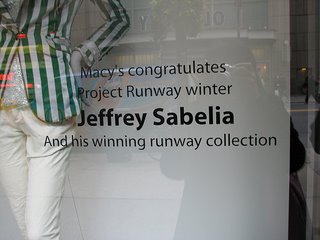 Two inexcusable spelling errors here, Macy's: Jeffrey Sebelia's name, and the word WINNER. We're going to skip the easy "loser" joke and simply ask, "What would Tim Gunn have to say about this?"

Answer: all of the above, especially No. 3. We hope Mr. Gunn adores SPOGG as much as we love him.
Posted by Martha Brockenbrough at 6:50 AM No comments:

Grammar: Is There Anything It Can't Do?

This just in from the newswire. If this isn't a reason to teach kids grammar (and also encourage their creativity and lateral thinking) we don't know what is.

WASHINGTON — Biologists reached back to elementary school to discover a promising new way to fight nasty bacteria: Apply the rules of grammar.

The unusual method to try to defeat drug-resistant microbes and anthrax borrows a page from "The Da Vinci Code" and the TV show "CSI: Crime Scene Investigation." Studying potent bacteria-fighters found in nature called antimicrobial peptides, biologists found that they seemed to follow rules of order and placement that are similar to simple grammar laws.

Using the new grammar-like rules for how these peptides work, scientists created 40 new artificial bacteria-fighters. They found that nearly half of them vanquished a variety of bacteria and two of them beat anthrax, according to a paper being published Thursday in the journal Nature.

This potentially creates not just a new type of weapon against hard-to-fight germs, but a way to keep churning out new and different microbe-attackers. In theory, that means that when bacteria evolve new defenses against one drug, doctors won't be stymied.

Using grammar as their guide, scientists could easily produce tens of thousands of new bacteria-fighters and test them for use as future drugs, said study lead author Gregory Stephanopoulos, a chemical engineering professor at the Massachusetts Institute of Technology.

It would likely take several years to develop the new medicines, but the process conceivably could be speeded up for fighting the worst bacteria, Stephanopoulos said.

In man's war with microbes, bacteria keep mutating to develop resistance to nature-derived drugs. However, this new method could allow scientists to jump several steps ahead of microbes, said Robert Berwick, a computational linguistics and engineering professor at MIT who wasn't part of the team.

The key turns out to be in the way the peptides are made: stringing together amino acid molecules, which scientists represent with letters. That's when researchers saw a pattern that would make an English teacher beam.

"You have a string of letters and that string of letters reminds you immediately of a sentence, a kind of incomprehensible sentence, and you wonder in that sentence, 'Is that meaning hidden?'" asked Stephanopoulos. He used the example of a sentence: "Dave asks a question." What Stephanopoulos did was the equivalent of substitute different names for Dave and found that the peptide often still beat the bacteria.

Harvard evolutionary biologist Marc Hauser said that using grammar rules to decode genetics and medicine is growing more popular. But he said he worries that too many people are calling grammar what is really just simple code, not nearly as complicated as human language.
Berwick said the bacteria-fighting grammar rules are equivalent to the extremely basic spelling rule, "i before e except after c." The grammar rules Stephanopoulos developed are about what 2-year-olds learn on their own by listening to adults speak, he said.
Posted by Martha Brockenbrough at 10:39 AM No comments:

Two Goofs in One Caption

From the home page of The Seattle Times today:

Giving a show of hands
It isn't size, speed, nor strength that separate Brandon Williams from other top tight ends. It is Williams' ability to catch nearly every football thrown within his reach that makes him a hot commodity. "He has the best hands of any player I've ever coached," says his coach, John Meagher.

Oops! That should be "or." The "nor" makes a double negative, and we don't think that's what the writer intended.

SPOGG also believes the "or" demands a singular verb. If it had been an "and" instead of an "or," those things would work together to make the verb plural. Picky, yes. But this sort of subtlety is one of the delights of language.
Posted by Martha Brockenbrough at 5:25 PM No comments:

Unless, of course, the landlord responsible for this listing really is willing to rent to a guy named Owen. If that's the case, we'll take it! 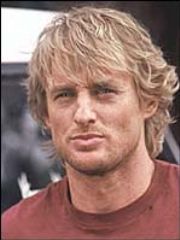 Posted by Martha Brockenbrough at 5:11 PM No comments: