What's Worse Than a Typo? 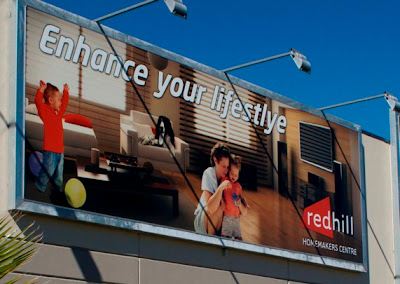 Thanks to James for the photo.
Posted by Martha Brockenbrough at 7:24 AM No comments:

Has Modern Life Killed the Semicolon

Reta sends in this fascinating piece from Slate on the semicolon, its history, and its questionable present:

When the Times of London reported in 1837 on two University of Paris law profs dueling with swords, the dispute wasn't over the fine points of the Napoleonic Code. It was over the point-virgule: the semicolon. "The one who contended that the passage in question ought to be concluded by a semicolon was wounded in the arm," noted the Times. "His adversary maintained that it should be a colon."

French passions over the semicolon are running high once again. An April Fool's hoax this year by the online publication Rue89 claimed that the Nicolas Sarkozy government planned to demand "at least three semicolons per page in official administrative documents." Parliamentarian Benoist Apparu was in on the joke—"The disappearance of the semicolon in Eastern France is absolutely dramatic," he gamely proclaimed—and linguist Alain Rey (barely) kept a straight face for a video calling Frenchmen to arms.

The semicolon is hardly dead. Though it appears more commonly as part of a wink than as a punctuation mark that links two related sentences, how many other punctuation marks have merited articles in the New York Times, Slate, Rue89 and Encarta? ;-)

Mark our words. It will enjoy a comeback even better than the one John Travolta made in "Pulp Fiction." We just need to find the punctuation equivalent of Uma Thurman so that the two may dance.
Posted by Martha Brockenbrough at 7:12 AM No comments:

This comes from the BBC by way of a loyal reader in the Midwest:

Mr Berlusconi has faced corruption charges in the courts for many years but has always protested his innocence.

[Wethinks he doth protest too much here. The word the reporter meant was probably "maintained." English. It's tricky, even if you are English.] <--- Pretend we never typed that.

This just in! Barry L., who never misses a thing, reminds us that protest has additional definitions.

Here is No. 4, from Encarta's dictionary: 4. transitive and intransitive verb say firmly that something is true: to state or affirm something in strong or formal terms
He continued to protest his innocence.
Posted by Martha Brockenbrough at 5:50 PM No comments:

The Trouble with Spell-Check

We've written before about a 1990s-era spell-checker recommending "Sodomy Hussy" as an alternative to Saddam Hussein.

Now, apparently, Hotmail recommends "Osama" as an alternative to "Obama." Sigh...We hope by now that people know not to accept all suggestions the software makes. It's software; you have a much more discerning brain.

The real reason we're posting this, though, is the hideous mixed metaphor below. Opening a can of worms the Obama campaign wants to stamp out? Since when does stamping get rid of worms? That's a fine way to make worm pudding on the sidewalk, which is just gross. We'd much rather eat stud pie. (See below. And, sorry for that.)

For months, Barack Obama's campaign has repeatedly, and not always successfully, tried to swat away references to Barack "Osama," the mutating of the candidate's name into the similar-sounding moniker of the world's most-wanted terrorist.

One mix-up, with potentially vast effect, apparently belongs to the unintentional category and gained wide currency this week: The spell-checker in Microsoft's Hotmail e-mail software recommends that users replace the word "Obama" with "Osama."

The glitch, which a Microsoft spokeswoman said the company is trying to fix, was brought to light this week by Minnesota political adman Bill Hillsman, who said the e-mail wrinkle "opens a whole can of worms again that the Obama campaign desperately wants to stamp out."

Posted by Martha Brockenbrough at 10:18 AM No comments:

Kara Y. sends along a notable typo in a university course catalog. They meant to offer "Women's Studies." Instead, they advertised "Women's Studpies."

Can we have the recipe? We'd like to bring some on our man-date. (See below.)
Posted by Martha Brockenbrough at 8:06 AM No comments:

There's a Nashville Metro Council member who wants an English-only clause to be added to the city's charter. The notion behind it is that no one has a "right" to read government documents in any language other than English.

We love English. Truly, we do. But we do not love people who insist English be the only language spoken in the United States. As much as we love English and hope everyone learns to write and speak it well, we also love our immigrant population, many of whom are on their way to citizenship. Why make government services inaccessible? That seems rather mean, y'all.

This is why we took special delight in the Nashville Post's response to the drama. Editors there took a red pen to the letter sent to voters, which is nothing less than the English-only crowd deserves.

The result is priceless. Nashville Post, we salute you.

If you're interested in the Nashville English First petition, here it is.
Posted by Martha Brockenbrough at 8:41 PM No comments:

Get Paid to Date

This comes from a Parade Magazine article about paid sick leave:

While polls show that Americans strongly support the idea, businesses are concerned about the cost. "Employers have finite resources," says Lisa Horn of the Society for Human Resource Management. "A paid-leave man-date would likely force employers to make up the cost by reducing wages or health-care coverage."

You know, if we could have a paid man-date (or a woman-date--we're open-minded), we wouldn't mind a little bite out of our salary. Long live the bromance and the womance! The world would be a better place for a little more love.


Thanks to Xavier D. for the swell find.
Posted by Martha Brockenbrough at 11:33 AM No comments: 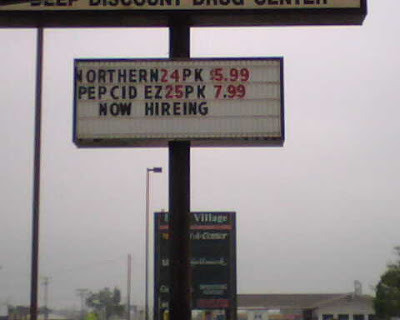 Hireing? Oy. On the bright side, this is probably one job where resume typos will not be a deal breaker.
Thanks to Karen C. for the photo.
Posted by Martha Brockenbrough at 8:13 AM No comments:

If You Read This with a Southern Accent...

... the word "perfomance" doesn't sound quite as bad, y'all. 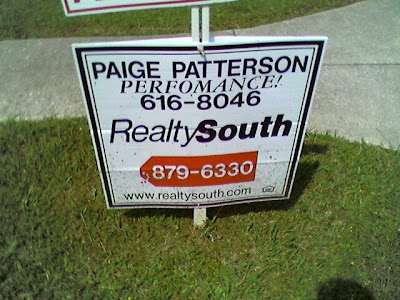 Posted by Martha Brockenbrough at 2:52 PM No comments:

Thanks to EditorMom, who sent this our way:

Princeton University Press has recalled all copies of one of its spring titles after discovering more than 90 spelling and grammar errors in the 245-page work. The book, Cop in the Hood: My Year Policing Baltimore’s Eastern District, by Peter Moskos, was published ... in an initial press run of 4,000 copies.

They blame an "inexperienced" copy editor. While it's true that person bears responsibility for editing out these errors, how is it that the author submitted such a messy text? It's practically...criminal!
Posted by Martha Brockenbrough at 11:52 AM No comments: 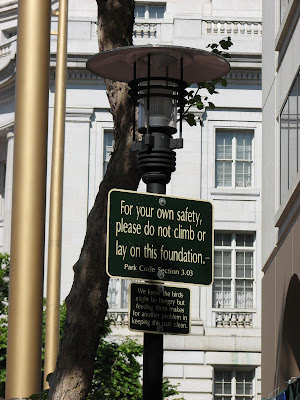 You hear a lot about New York's "Pale Male," the bird who chose to roost in high-priced Manhattan real estate, crapping all over the wealthy residents as they stepped out onto the sidewalk.
You hear less about the literate birds of San Francisco, who have been instructed not to lay on the foundations near this sign. That's good advice. The eggs would just roll off, and perhaps splat on people as they passed.
Wait... what's that? This isn't for the birds, after all? You mean people were trying to lie on the foundations? Goodness, that sounds uncomfortable.
Thanks, Barry L., for the photo.

Posted by Martha Brockenbrough at 10:42 AM No comments:

WESTLAKE, Ohio -- A Cleveland-area principal says he's embarrassed his students got proof of their "educaiton" on their high school diplomas.

Westlake High School officials misspelled "education" on the diplomas distributed last weekend. It's been the subject of mockery on local radio.

Principal Timothy Freeman says he sent back the diplomas once to correct another error. When the diplomas came back, no one bothered to check things they thought were right the first time.

The publisher has reprinted the diplomas a second time and sent them to the 330 graduates.

Posted by Martha Brockenbrough at 10:35 AM No comments:

From an MSN Gossip piece about the singer John Mayer:

Mayer then deconstructs the flick's prototypical jock, Troy: "He's good-looking, rocks a period-relative badass Mustang convertible and he's a total [male part of the anatomy that rhymes with 'tick'). All we can do from the moment Troy enters the frame is to wait with baited breath to see Troy lose and the Goonies win."

Unless he's been eating herring, that should be bated breath. Bated means "held" breath. Fish breath is something else, entirely.
Posted by Martha Brockenbrough at 10:20 AM No comments:

"It was kind of funny, but kind of rude at the same time," Ippolito said.

The mistakes were found on four of the yearbook's 176 pages, co-editor Amanda Gummo said.

Ed Patrick of Taylor Publishing, which printed the book, said his company is responsible for the errors and will provide free stickers printed with the correct names.

"It happens all the time, every year," Patrick said. "Look at any yearbook in the country."

This reminds us of our years as a college newspaper editor. The first Gulf War was underway, and our primitive spellchecker didn't know what to make of a certain Iraqi dictator's name.

And that is when we learned not to take all of the recommendations our word-processing software gave us. Perhaps this printer has learned the same lesson.
Posted by Martha Brockenbrough at 1:01 PM No comments: