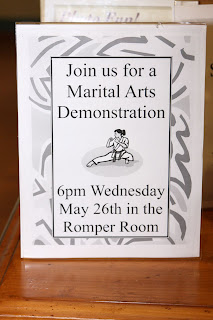 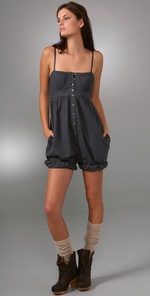 A rumpus is a wild party, often held in a rumpus room. In Where the Wild Things Are, however, the wild rumpus was held outdoors. You know the world is topsy-turvy when the grownups are wearing baby clothes and the monsters are partying outside so they don't wreck the furniture.
Posted by Martha Brockenbrough at 9:27 AM 2 comments:

A book publisher is looking for photos of bad grammar. The categories are below. They'd purchase rights to print them (which would mean you'd have to be the photographer).

Run-on Sentences
An image showing a run-on sentence; too much information provided in one sentence that could easily be broken up into shorter sentences.

Modifier Problems
Misuse of modifiers (dangling or misplaced) such as “only”, “almost”, or a phrase – e.g. “Alice discovered a magic mushroom walking through Wonderland.” Or “When writing, a dictionary is your best friend.”

Parallelism
Images that show a lack of parallelism in the wording – e.g. “No smoking, drinking, or loud noises.” “A SmartCar is great because they’re cheap, easy to park, and driving one is fun.”

Correct Verb Forms
Image should show incorrect verb forms – e.g., “I drinked it in one gulp.” Or use of the passive voice that is unclear.

Subject-Verb Agreement
Image that shows a lack of agreement between the subject and verb, such as a singular subject with a plural verb “Everyone on the team show great respect for the coach” – this should read “shows”

Tense
Incorrect use of the verb tense or mixed verb tenses in the same sentence – “I’m standing right behind Sophie when she suddenly screamed.”

Person Agreement
Errors including misuse or mixing of “you” and “one” or “everyone” and “their”. E.g., “If you wish to succeed, one must work hard.” Or “Everyone must hang up their own jacket.”

Commas:
An image showing the incorrect placement of a comma, or the lack of commas where they are required. “A panda is a bearlike marsupial that eats, shoots, and leaves.”

Colons:
An image showing the misuse of the colon, for example after “is” or “are” – e.g., The things that bug me are: mosquitos, parking tickets, and rap music.”

Quotation Marks:
An image showing misuse of quotation marks; perhaps where someone has put a word in quotation marks as emphasis, rather than to show a quotation – e.g., “He told he just wasn’t ‘that’ into me.”

Question Marks, Exclamation Marks:
An image showing misuse of question marks or exclamation marks – e.g., “I wonder if you know them?” where the “?” is not needed; or overuse of an exclamation mark at the end of each sentence.
Posted by Martha Brockenbrough at 3:09 PM 7 comments:

Thank you for permitting your children to participate in the Lowe’s Build and Grow Clinic! In order to help us better serve you and your child, please fill out this Clinic Waiver Form in its entirety. Lowe's values your participation and we look forward to helping your child Build and Grow! The first 50 kids to register and be present at the store at 10am will receive a kit, aprons and googles.


Wow. We'd like to receive googles, too. We'd sell our stock, buy some goggles, and spend the rest of our lives lounging by the pool.


Thanks to Trisha W. for sending it in.
Posted by Martha Brockenbrough at 11:00 AM 3 comments: 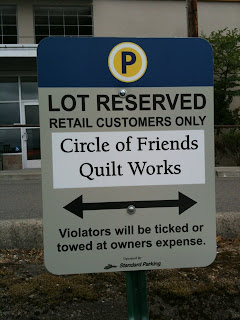 Note the fine print on the bottom of this sign. We know they meant to write "ticketed," but "ticked" is so much more accurate.

A truly honest sign would read: "Violators will be ticketed and ticked when they see the size of the towing bill."

In other quibbling, we have never liked the "owners' expense" construction, even properly apostrophized. Who is the owner? Of the car? Of the business? Of the dog that peed on the nearby fire hydrant?

Why not just say, "Your car will be towed and you'll have to pay the fee?"


Thanks to Paula B. for the photo.
Posted by Martha Brockenbrough at 10:54 AM 4 comments:

The Writing Is on the Wall (Unfortunately) 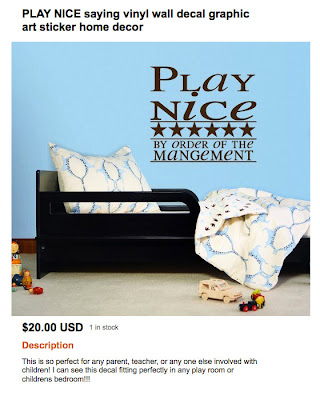 This comes from the genius parody site Regretsy by way of our friend Kim.

Who is this "mangement" character they speak of? And what has he done with the children in that room? We fear they didn't play nice and have been eaten ... or worse. We're not entirely sure what "worse" is, but it probably has to do with being used as child labor in the homes of people who make the other wares featured on Regretsy.

Be sure to click the Regretsy link above. There are a few more misspelled wall decals.

SPOGG has a confession: We were not riveted by the LeBron James basketball drama and thus did not care one way or another which team he chose.

We did notice when someone asked who "LeBon" James was, and after we got over thinking about Simon Le Bon circa 1985, we read the letter Cleveland Cavaliers owner Dan Gilbert wrote after James chose another team.

It is a case study in quotation mark abuse, and while our inner Jiminy Cricket thinks it's also a case study in poor sportsmanship, we'll focus on the punctuation for now.

Actually, that's sort of a lie. We'll insert some commentary as well. We can't help ourselves.


Dear Cleveland, all of Northeast Ohio and Cleveland Cavaliers supporters wherever you may be tonight;  [Why the semicolon, Coach? A colon would have done nicely. Or even a comma. Semicolons aren't an angry compromise for the indecisive.]

As you now know, our former hero, who grew up in the very region that he deserted this evening, is no longer a Cleveland Cavalier.

This was announced with a several-day, narcissistic, self-promotional build-up culminating with a national TV special of his "decision" unlike anything ever "witnessed" in the history of sports and probably the history of entertainment. [Someone doesn't watch enough reality programming on TV. Coach, try The Bachelor sometime.]

Clearly, this is bitterly disappointing to all of us.

The good news is that the ownership team and the rest of the hard-working, loyal, and driven staff over here at your hometown Cavaliers have not betrayed you nor NEVER will betray you.

There is so much more to tell you about the events of the recent past and our more than exciting future. Over the next several days and weeks, we will be communicating much of that to you.

You simply don't deserve this kind of cowardly betrayal.

You have given so much and deserve so much more. [Jiminy Cricket can't resist. Cheering at a basketball game is recreation, not a form of giving. Working at a soup kitchen is.]

In the meantime, I want to make one statement to you tonight: "I personally guarantee that the Cleveland Cavaliers will win an NBA Championship before the self-titled former 'king' wins one."

You can take it to the bank. [Actually, sir, people have to take a lot of money from the bank to attend a game. You, however, should profit. Wait. You were being metaphorical? OK, then. That's a cliche.]

If you thought we were motivated before tonight to bring the hardware to Cleveland, I can tell you that this shameful display of selfishness and betrayal by one of our very own has shifted our "motivation" to previously unknown and previously never experienced levels. [OK, when you put your own "motivation" in quotes like that, it makes it seem as though you never had any in the first place. You are a madman.]

Some people think they should go to heaven but NOT have to die to get there. [Wait. He's going to Miami. If that is heaven, we don't want to die, either. Not until we have a better tan and wax job.]

Sorry, but that's simply not how it works.

This shocking act of disloyalty from our homegrown "chosen one" sends the exact opposite lesson of what we would want our children to learn. And "who" we would want them to grow up to become.

But the good news is that this heartless and callous action can only serve as the antidote to the so-called "curse" on Cleveland, Ohio.

The self-declared former "King" will be taking the "curse" with him down south. And until he does "right" by Cleveland and Ohio, James (and the town where he plays) will unfortunately own this dreaded spell and bad karma.

Sleep well, Cleveland. Tomorrow is a new and much brighter day...

I PROMISE you that our energy, focus, capital, knowledge and experience will be directed at one thing and one thing only: [That you won't use unnecessary capitalization?]

DELIVERING YOU the championship you have long deserved and is long overdue...[Nope, apparently you are fully aboard the Unnecessary Punctuation Train. Also, an ellipsis at the end of a sentence needs that fourth period. Here, we would've just used the one period. If you really wanted an ellipsis, you could have put one and the resulting dramatic pause after "deserved." And with that, we have demonstrated the proper use of quotation marks around words that are not actually quotations.]

Thanks to Marla Smith-Nilson of Water1st for sending the letter. Water1st helps build water and sanitation systems for people in the world's poorest communities. This is an example of giving in its most inspirational form. For about $70--less than an NBA ticket--you can provide clean water, toilets, and hygiene education to a child for life, sparing that child a great deal of suffering, and even death. And no one makes you put on an oversize polyester jersey.
Posted by Martha Brockenbrough at 5:59 AM 4 comments:

We know that line-caught trout is served at fancy restaurants. We know that hand-crafted coffees and hand-dipped ice cream are all the rage.

We draw the line, however, when it comes to advertising who's cooking the fries--at least when they're being sizzled by that sort of professional.

It just doesn't sound sanitary. No, madam. We do not want fries with that. 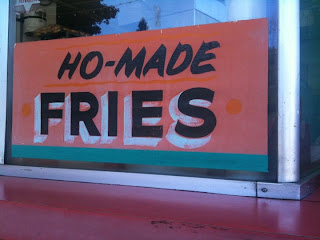 Posted by Martha Brockenbrough at 8:41 AM 8 comments:

We know it's rude to write on other people's signs, and generally, we frown on the practice. Sometimes, though, it must be done. This photo, from Ashleigh W., comes from a certain section of the used bookstore: 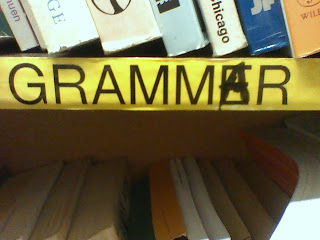 There. We feel much better now.
Posted by Martha Brockenbrough at 8:41 AM 7 comments: