If you thought you were going to use this urinal to travel through time, think again. It is temporally out of disorder (no doubt temporarily). 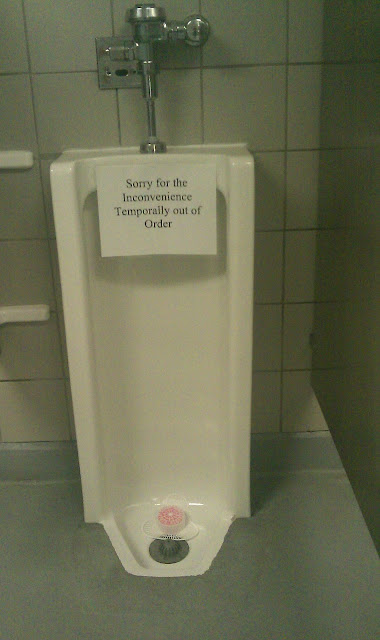 Thanks to Tom for the photo.
Posted by Martha Brockenbrough at 6:39 AM 7 comments:

Here are the latest casting-call goofs sent to us by a Real Hollywood ActressTM. Enjoy!

You will be paided.
Well, ain't that grand! But being paid would be better.

She becomes a hooker to make ends meat.
Is she fishing and cooking decidedly non-vegetarian meals down by the docks? [SPOGG: Making ends "meat" for money is illegal in most states.]

Posted by Martha Brockenbrough at 5:37 AM 4 comments:

So Close, But Yet So Far

Sarah M. sent along this misspelled caption from her local newspaper, along with the hope that someone who graduated from journalism school would know how to spell.

A few things: Not everyone who works at a newspaper goes to journalism school. We never did (and instead, studied Classics and English literature, which probably explains a lot).

Photographers tend to write photo captions, or "cutlines," as they are often called in newsrooms. Although these should be proofed, we tend to give creative people a bit of slack when it comes to spelling. No doubt there are many photographers who spell well. We knew enough who didn't, though, to be sympathetic with our wincing.

There are a lot of expressions like "do to" — ones that are fouled by a homophone. "Half to," "could of," no doubt the members of SPOGG could generate a long list. The question we have, though, is what to do about it. For people who don't learn language through reading it and don't form mental pictures of words when they write it, it is very difficult to convince them that these are, in fact, errors. Trust us. We have a 9-year-old at home who repeatedly writes "half to." 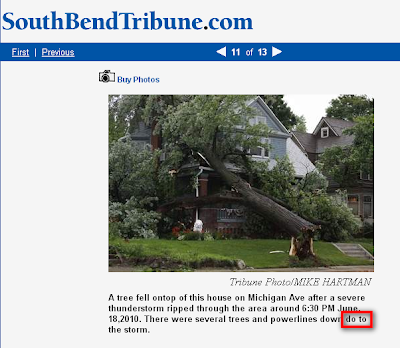 Posted by Martha Brockenbrough at 6:38 AM 3 comments: