4 Friends challenge you to the IQ QuizThe smartest scored 127. Find out who and if you can beat them!

You know, if we had a nickel for every funny bit of grammar on Facebook, we'd certainly make more than we do running SPOGG. Probably even ten cents more! Cha-ching!

But seriously. We know there are people out there who thinks it's fine and dandy to use "them" as a singular pronoun. We are not one of them, especially since this one would have been so easy to avoid.

4 Friends challenge you to the IQ Quiz. The smartest scored 127. Find out who and if you can beat the high score!
Posted by Martha Brockenbrough at 6:40 PM No comments:

Jim found this little nugget, for which we are grateful:

I can't resist pointing this out, from PetPulse:
Alaska Governor Sarah Palin also pardoned a turkey in her native Wasilla last week, while displaying a grizzly scene many succulent turkeys are likely to encounter tomorrow.

That should read grisly, not grizzly. While Alaska has its share of Grizzly Bears, this scene was all about turkeys (Palin included). Grisly, indeed.
Posted by Martha Brockenbrough at 11:23 AM No comments:

Ordinarily, SPOGG doesn't mock the English of people who aren't native speakers. We saw this photo, though, on the blog of a friend who writes novels. 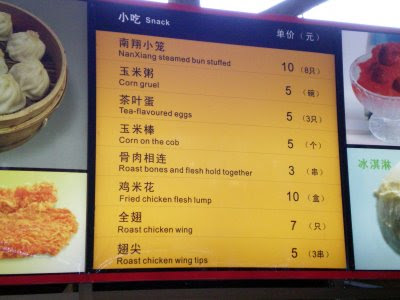 She said the "fried chicken flesh lump" was quite tasty, and that the sign made her giggle. We are up early and read this as "gaggle."

Voila! Instant portmanteau. To gaggle means to giggle + gag at an unfortunate typo or mistranslation in a menu. (Our other favorite in this category? Barry Leiba's "crap meat.")

Posted by Martha Brockenbrough at 5:10 AM No comments:

Martha Stewart: Maybe Not So Popular?

This comes from her blog:

My good friends, Michael and Judy Steinhardt, have an amazing
piece of property near my home in Bedford, and they are so fortunate to have
such a grove.

SPOGG worries that Martha is short on good friends. Otherwise, why would she wrap the Steinharts in commas? That punctuational flourish limits her "good friends" category to the Steinhardts. While we're sure they're lovely people, surely Martha would count Snoop Doggy Dogg among her besties? After all, he was just on her show--fo shizzle!

Here's how it works:

If there's just one of something, use a comma, --The Harry Potter author, J.K. Rowling,...
If there's more than one, don't--Magazine moguls who spend time in the slammer...

Punctuation. It's a good thing.
Posted by Martha Brockenbrough at 4:13 PM No comments:

Tiddy? That's Not How You Spell It

Posted by Martha Brockenbrough at 7:41 AM No comments:

You have to zoom in to fully appreciate it, but it's a story about a pastor recommending a seven-day sex solution for people suffering "martial" problems in the bedroom.

Look, we're not going to judge, but if people like it rough... Wait! What are we saying! Sorry. We're going to blame that bit of inappropriateness on Diet Coke, the sponsor of this blog break.

Posted by Martha Brockenbrough at 12:28 PM No comments:

We are amused.
Posted by Martha Brockenbrough at 6:27 AM No comments:

More Cliches Thank You Can Shake a Stick at

Check out ClicheWeb. We particularly liked their "mixed cliche" section. (Never lick a gift horse in the mouth. Indeed!)
Posted by Martha Brockenbrough at 10:19 AM No comments:

An Ode to Copy Editors

Here's the winner of our copy editing contest. This piece, written by Jeff Owens, turned our question--how does copy editing save the world--on its head.

The simple fact is that while good copy editing saves much writing from clumsiness, inelegance and error, it can’t save the world. True, many copy editors—a charmingly if not irascibly OCD bunch—behave often enough as if it can, but it can’t.

Don’t worry about the world, though. The world will take care of itself with or without us.

What copy editing can do is help save the language, and brother, never was that mission more urgent than it is right now. It’s a shameful embarrassment how many otherwise functioning (more or less) U.S. adults managed to finish high school but still can’t write a sentence—let alone a letter, an essay or even an e-mail—without sounding like one of the Clampetts. And then there’s marketing, corporate-speak and the digital age; all relentlessly tearing away at written English like piranhas (I’ll step outside with anyone who thinks impacted can be used by anyone besides dentists).

Copy editing takes the great literary wilderness of poor grammar, style, usage and spelling used by the Great Unwashed every day and attempts to impose its own sort of manifest destiny on it, and to impart sensible order and structural soundness (to say nothing of good spelling and factual correctness) on a sprawling language that is constantly evolving. It doesn't even have to make writing great—just making it not suck is often good enough.

Copy editing, then, is no less than a bastion of civilization. The world doesn’t need saving. But the word does, and copy editing is what fights the good fight.

Posted by Martha Brockenbrough at 12:55 PM No comments:

TWISS: This Week in Silly Spam

If you're peddling online degrees, this is a bad subject line to market your wares:

want to continue your learnings ?

We expect much more from con men. To quote Desperaux's mother, "It is such the disappointment."
Posted by Martha Brockenbrough at 6:08 AM No comments:

These come from the London Telegraph. Oxford researchers compiled the list for a book called "Damp Squid," and we're pleased that some of these expressions made it into "Things That Make Us [Sic]". Why does this please us? Because anything with an English accent gives us a giddy, girlish thrill. We can't help it.

Posted by Martha Brockenbrough at 5:48 AM No comments:

After all the reports on the elections last night, I have a question for you. My husband, son and I believe that the phrase "this is an historical moment . . ." is incorrect. We were taught that "an" preceeds letters beginning with vowels and "a" preceeds those beginning with consonants. So the correct phrase would be "this is a historical moment . . ." Is there an exception to the rule that I don't know about? Or is this another case of a phrase used so many times incorrectly that most people think it's correct?

When the “h” is pronounced, “a” is the proper article. When it’s not—say, like the way everyone but Martha Stewart pronounces “herb,”—then you should use “an.”

Historical, which has a stressed second syllable, has a somewhat weak “h” sound. This is why many people say “an.” Modern language experts such as Bryan Garner think this is a wee pretentious. Meanwhile, "history," which has a stressed first syllable, would never get an “an” because the pronunciation requires us to punch the “h.”)

There’s one other distinction worth noting on a historic day like today.

“Historic” means historically significant. “Historical” just means of or related to the past. So it would be both pretentious and inaccurate to call the election of the first black leader in Western history “an historical event.” In other words, wait for that very thing to happen on cable TV.

Cheers,
Martha
Posted by Martha Brockenbrough at 7:45 AM No comments:

The New York Times has a column by Stanley Fish about a plumber who might actually deserve more fame than that Joe guy.

It does contain a wee error:

There is one story I shall never forget; nor shall the others who heard it one evening in Chapel Hill, N.C., when my wife and I, my parents and her parents (cultivated, literate people) were having dinner in a restaurant. Because the restaurant was housed in a former railway car, the passage was narrow and the tables close together.

Although "shall" has largely fallen off the tongues of the masses, people who want to use it to elevate their style should do so correctly.

The old-school rule was that "shall" was the first-person form expressing something that would be done in the future. I shall and we shall are correct. For second and third person, though, "will" is the form to use.

So, I shall but others will. I shall floss my teeth. Others will floss their teeth.

Interestingly, this reverses with a determination, promise or command.

I will eat my grapes! They shall eat their grapes!

Interesting, no? Here's the entire column, if you're curious.
Posted by Martha Brockenbrough at 7:48 AM No comments:

Punctuation in the Movies

What happened there isn't clear, but we enjoyed this column about punctuation in the movies. Apparently the hyphen is one dangerous character.
Posted by Martha Brockenbrough at 5:43 AM No comments:

More Whoppers From the Candidates
FactCheck: How Obama, McCain have mislead voters in recent weeks

The past tense "mislead" is "misled."

It'll be nice to have this election in the past tense, too.
Posted by Martha Brockenbrough at 12:10 PM No comments: