Karen sends this in:

A "pill mill" run from a Biloxi doctor's office and pharmacy is to blame for nine fatal drug overdoses, a federal agent testified Thursday.

The Family Medical Center and Tran's Pharmacy on Division Street were considered "the place to go," said Davis. He described one incident involving several medications that shouldn't have been prescribed together as "a cocktail for danger."
...
The DEA agent, testifying 1½ hours, described what he and four other agents experienced while going undercover as patients. The clinic operated on a "cash only" basis, said Davis, and the doctors provided little or no examination. Davis said his first visit with Dr. Thomas Trieu was only a couple of minutes of "face to face" time.

Davis said some patients appeared to be legitimate, but some were "reeking of marijuana," said Davis, "and I suspected some were armed."

Now it's true the reporter is quoting people directly in those snippets. That doesn't mean it's not an annoying practice. If you're not going to quote a whole sentence, don't quote at all. Just fold those words into your own prose. The source is not going to accuse you of plagiarism, especially because you're giving attribution.

And Xavier sends along this picture from his new neighborhood, where law enforcement apparently has a bit of a Rodney Dangerfield problem. No respect! No respect! 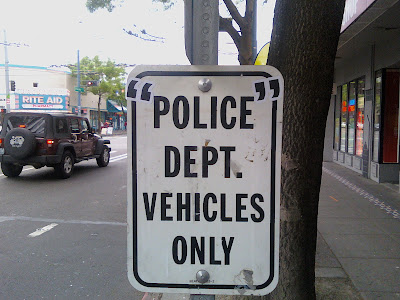 Posted by Martha Brockenbrough at 2:16 PM No comments:

Nick S. sends this in--a shot of the interior of his new Lexus, which has a GPS in the dashboard. 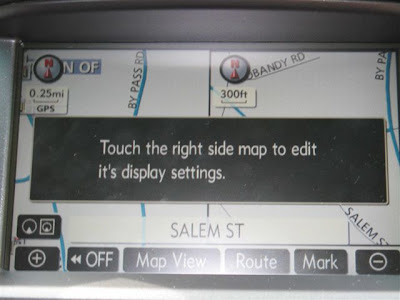 Oops! That should say "its" display settings. "Its" is a possessive. "It's" is a contraction that means either "it is" or "it has."

We remember this by thinking of his, hers and its towels (those are for drying the dog, which has been spayed or neutered to prevent unwanted puppies).
Posted by Martha Brockenbrough at 10:54 AM No comments:

No one ever said you had to be smart to be a criminal. Check out the phishing scam we just received:

After the last annual calculations of your fiscal activity we have determined that you are eligible to receive a tax refund under section 501(c) (3) of the Internal Revenue Code. Tax refund value is $189.60.

Please submit the tax refund request and allow us 6-9 days in order to IWP the data received. If u don't receive your refund within 9 business days from the original IRS mailing date shown, you can start a refund trace online.

If you distribute fund to individuals, you should keep case histories showing the recipient's name and address; the purpose of the award; the maner of section; and the realtionship of the recipient to any of your officers, directors, trustees, members, or major contributors.

This notification has been sent by the Internal Revenue Service, a bureau of the Department of the Treasury.

The numskull who wrote this tried so hard to mimic government jargon, but couldn't resist slipping in a "u" for "you." So pathetic. Really.
Posted by Martha Brockenbrough at 4:16 PM No comments:

Marriage: It's Not *That* Bad

This headline appears in the Seattle Times:

We've been married 10 years now, and we don't find it anywhere near that bad.

Thanks to Wendy M. for the tip.
Posted by Martha Brockenbrough at 11:19 AM No comments:

SPOGG will be out of town for a few days, so we thought we'd leave you with this inspirational image, pilfered without shame from Gawker.com.

America's "offical" language? Only when she learns to spell. 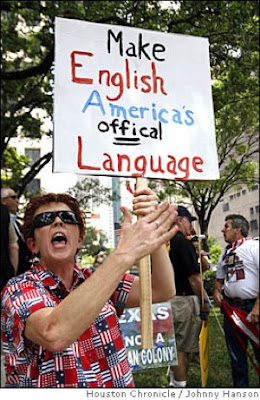 Posted by Martha Brockenbrough at 6:33 PM No comments:

Oh, the Difference One Letter Can Make

Oh, the difference one letter can make... (or two letters, if you can count better than SPOGG can).

Another good one from Ashleigh:

The scale of the operation suggests that Texas was ready. Dozens of heavily armed police went into the compound with an armored personal carrier. They met almost no resistance.

A personnel carrier is used to transport employees. A personal carrier? Well, we're thinking that's the sort of thing best used to transport infants. And while it is a tough world out there for babies, it's not yet so tough that we need to walk them in armored Snuglis.
Posted by Martha Brockenbrough at 10:29 AM No comments:

Ashleigh sends this in from her law office. It's an ad from a monthly newsletter that goes out to the entire Colorado Bar Association and--oops!--confuses "who's" with "whose."

They do sound exactly alike, but they're not interchangeable. "Whose" is a possessive pronoun. "Who's" is a contraction for who+is. If you can substitute who+is, then you know to use "who's" instead of "whose."
Posted by Martha Brockenbrough at 11:25 AM No comments:

Click the link above to learn, more, about the plague of commas, appearing in, our sentences.

Posted by Martha Brockenbrough at 11:19 AM No comments: