Thanks to all the SPOGG members who sent word about the fate of the Typo Eradication Advancement League. The men who've criss-crossed the country crossing out spelling errors in signs have received what some call their "comeuppance."
One of the signs they corrected was a 60-year-old piece in the Grand Canyon (a National Park), painted by the artist Mary Colter.

The members of TEAL had to pay $3,035 to restore the sign, and are banned from national parks for a year.
There are cheers and jeers coming from both sides of the fence. Many reasonable people, including John McIntyre of the Baltimore Sun, thought TEAL was trivializing the pursuit of excellence in language. Others, including some of our beloved SPOGG members, offered to post bail.
Our thoughts on the matter: It's distracting, annoying, and often comical to see errors in signs. The only time we have taken a pen to one was in a classroom, where we neatly inserted an apostrophe where it belonged. The teacher wasn't looking and wasn't there, and we felt strongly that children should not be taught that "womens" is a word. Even so, we had pangs of conscience later.
Generally speaking, we leave signs alone. As we told a Christian Science Monitor reporter, people pay for those signs. We wouldn't want people to write on our stuff, and we don't write on other people's stuff. We aren't at all opposed to letters sent with humor and kindness, although we'd never send one to someone whose first language isn't English. It's hard enough starting over in a new country without having the natives poke fun.

Talking about errors in a blog is another matter, though. We can all learn from the discussion.
There is one correction, though, that we don't mind seeing. This photograph was taken by our friend Kat, of a bit of graffiti in her neighborhood. 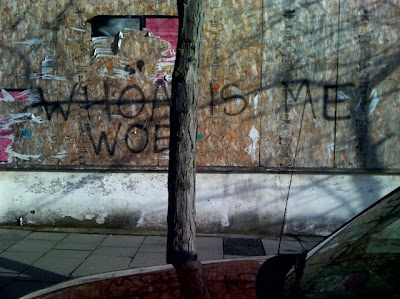 Posted by Martha Brockenbrough at 6:27 AM

Labels: crime and grammar, grammar in the news, spelling