Perhaps the great minds of SPOGG can help me resolve a question I've been considering for some time. I regularly travel the Massachusetts Turnpike. At irregular intervals, signs have been posted urging tired drivers to take a break:

What's interesting to me is the spacing of the last line. It appears that the sign orignally read FOR SAFETY'S SAKE and was later corrected, probably after an irate motorist called the Turnpike Authority's signage department and accused them, in complete and gramatically correct sentences, of getting it wrong.

Your question, however, contains multitudes. We are giddy with all we could write on the topic.

Shakespeare did originate the phrase "for safety's sake," as well as many others (see the list).

SPOGG hereby dubs Shakespeare "The Father of the Cliche." We mean this as a compliment. He said so many things so well, that many writers since have copied him, often without even knowing. See if you can go an entire day without repeating one of Shakespeare's now-hackneyed phrases. It's not easy!

But, getting back to the topic of safety's sake. Just because our modern edition of Henry IV renders it correctly doesn't mean that's how Shakespeare wrote it. Shakespeare was far from consistent in his spelling. He even spelled his own name several different ways.

"Zounds!" one might say, "Does that mean the greatest writer in the world couldn't spell?"

Perhaps. We don't know. We can't, as he lived in an age before spelling had been standardized. This no doubt gave the people copying his work fits. What did he mean to write? It's not a surprise that standard spellings have taken root. They help keep our meaning clear.

But that's the best correct spelling can do. The real art of writing doesn't require standardized spelling. Nor is it hampered by irregularities of phrase or form. As Shakespeare's legacy of cliches proves, creativity outlasts rules of grammar and spelling.

And for that, SPOGG is glad. 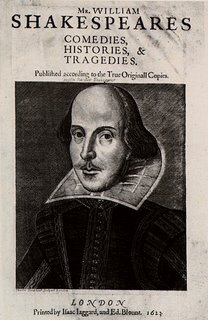 Posted by Martha Brockenbrough at 9:06 PM

Outstanding, except for one thing. I thought the actual construction was "All that Glisters is not Gold."

All this time, I thought Amway had it right when they used the word for their toothpaste, Glister.

I await your judgment (even thought I'm sure The Bard would spell (spel) it "judgement."