The reporter covering this story is trying to have it both ways:

A California brown pelican probably was intoxicated by a naturally occurring toxin found in algae blooms when she hit the car on the Pacific Coast Highway in Orange County Thursday, wildlife officials said.

The driver was startled, but not hurt. The pelican needed surgery for a broken foot, and also had a gash on its pouch.

Assuming the pelican hasn't been altered and isn't equipped with both parts, the answer to this is a matter of style. In other words, there isn't a firm rule; it depends on who's wielding the red pen at the publication in question.

Some publications argue that animals are all its. SPOGG doesn't subscribe to this theory, particularly in the case of pets. If you know your dog is a girl, and even if she's gone under the knife, it's just mean not to call her a she. In any case, though, one ought to pick a sex and stick with it. Neutering someone mid-story just looks sloppy.

Oh, and as for how they could tell the pelican was a girl, SPOGG believes one looks at the color of the feathers. Unlike with certain animals (we're thinking horses, here), birds don't swing their parts about. In fact, they don't have external genitalia, though some have retractable parts, which come in handy for water sports of a reproductive nature.

In any case, they should not be getting drunk, as this can only lead to collisions with cars and overly frank grammar lessons. 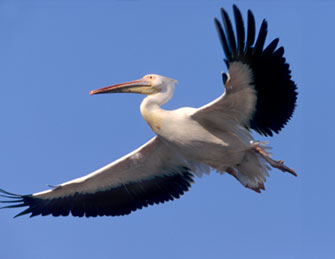 Posted by Martha Brockenbrough at 8:56 PM