Myriad: How Does This One Work?

Tamara K. wrote with this question:

The word myriad has been popping up more and more lately. I even heard it in a show about the Great Barrier Reef, on sports newscasts and in business meetings. But, my understanding of the word that it should be used like the word “many.” However, whenever I hear it used it is used more like the work “lot,” as in “a lot.” Which is the proper usage?

We love questions like this (even though they are more about usage than grammar). When questions like this pop up, though, it doesn't take SPOGG to answer them. A good dictionary--the Oxford English Dictionary is a favorite--will tell you all sorts of things about the origin of words. We log into the OED through our local library's site, which offers free subscriptions to patrons. Does your library? Check it out. That's what your tax dollars pay for.

Bryan Garner, author of the indispensable Garner's Modern American Usage, writes that "myriad is more concise as an adjective than as a noun...but the mere fact that the adjective is handier doesn't mean the latter is substandard." (Note: a brand new version of Garner's usage guide is out. We highly recommend it.)

In short: There's no need to spend any time wondering about what words mean and how they're best used. Make a habit of looking things up at the OED and in Garner's book, and you will fill your brain with useful language facts. SPOGG does love questions, of course. So keep on sending them!
Posted by Martha Brockenbrough at 3:46 PM 2 comments:

Let's Get Something Straight

We know! Let's buy or sell an apostrophe together! The side of your car looks like it could really use one.

"Lets" without the apostrophe means "permits" (among other things).

"Let's" is a contraction of "let us," which is what the slogan intends. 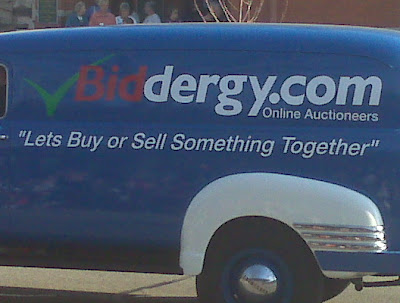 Thanks to Asa D. for the photo.
Posted by Martha Brockenbrough at 10:32 AM 4 comments:

More Tales from the Casting Couch

SPOGG's Hollywood actress friend has sent us more real errors from casting calls, along with her biting repartee:

Seeking: ametaur decorators.
Is that someone who outfits a centaur's cousin?

Wardrobe: Glases. High hills.
The hills are alive with the sound of glazing...[SPOGG suspects the hills they desire are at least a C-cup.]

"Excellent scene for someone looking to build there real."
...so the foreman points to the empty lot and says, "Build there. Real."

Seeking: ALL ELASTICITIES.
This was also spotted last month. Are you still hiring rubber bands, or did you mean all ethnicities?
Posted by Martha Brockenbrough at 4:11 PM 1 comment:

Let Us Give Thanks...For Copy Editors

We fully admit we are jealous we did not get to attend this swank White House party. This is why we got a good chuckle out of the New York Times blog post this morning making fun of the editing on the menu:

The White House pulled out all the stops in preparation for President Obama’s first state dinner on Tuesday night, hiring a new florist, selecting a renowned guest chef and even inviting a number of high-profile musicians to perform.

But one person the White House apparently neglected to hire was a spell checker.

The special dinner menu — a lavish mélange of Indian and American favorites as well as several excellent wines — was rife with typos.

The second course of the evening was paired, for example, with a delicious 2006 Brooks Riesling, which, the menu noted, was bottled in “Wilamette Valley, Oregon.”

A diligent copy editor would have changed that to the proper spelling, “Willamette Valley.”

For their third course, the 320 guests were offered a dish that, according to the menu, included potato dumplings with tomato chutney and “chick peas,” which should in fact have been “chickpeas.” That course, the menu noted, was paired with an excellent red wine, a “2007 Granache” from Beckmen Vineyards. The correct spelling of the popular varietal, one of the most widely planted types of red grape in the world, is actually “Grenache” with only one “a,” not two.

The last bottle of the night was equally impressive, a sparkling chardonnay from Virginia. It was listed as a “Thibaut Janisson Brut,” missing a hyphen between the first two words. And last but not least, the dessert may have been free of error in taste, but not so in spelling. It included, according to the menu, passion fruit and vanilla “Gelees,” the French word for “gelled,” which, when written correctly, includes an acute accent on the second “e.”

For future reference, SPOGG is always available for menu editing. We work for food.
Posted by Martha Brockenbrough at 9:41 AM 3 comments:

We're Thinking He Missed Some Punctuation

We've watched this clip a couple of times now and do not believe this Dana person is taking the day off because he was murdered and set ablaze while celebrating his birthday.

Rather, we think Dana is taking the day off, and the subject of an entirely separate news report had the worst birthday ever. We can't see the teleprompter, but we bet there's a missing bit of punctuation--or even paragraph break--that would have made this a bit clearer. In any event, yikes!

Thanks to Peter W. for the video.
Posted by Martha Brockenbrough at 11:57 AM 2 comments:

Apparently, There's Something Worse Than Bad Grammar and Punctuation

This comes from the Seattle P-I:

The awards were established by the editors to "gently dissuade authors and publishers from including unconvincing, perfunctory, embarrassing or redundant passages of a sexual nature in otherwise sound literary novels." They are annually awarded to the author who produces the worst, most laughable and/or jarring description of a sexual encounter in a modern novel.

At first, we thought we'd hit the jackpot: Ungrammatical sex scenes! Yes! (And yes, and yes!) Apparently, though, this is not the case. We don't completely follow this paragraph, but it ends with dirty punctuation puns, which earns automatic forgiveness:

The award itself is in the form of a "semi-abstract trophy representing sex in the 1950s," which depicts a naked woman draped over an open book.

This year's nominees are (with brief excerpts from offending passages)...

Posted by Martha Brockenbrough at 8:51 AM No comments:

Our brother-in-law has befriended us on Facebook, which continues to taunt us with its crazy grammar:

You are now friend with [INSERT SECRET IDENTITY HERE].

Friend? FRIEND? How about friends? We cut Facebook a bit of slack for using "their" as an all-purpose pronoun. We look the other way when we see things that say "you have 1 new messages." But we can't think of a scenario where "friend" would be the correct choice.

Have you considered a copy editor, Facebook? We know quite a few who're looking.
Posted by Martha Brockenbrough at 12:34 PM 3 comments: The good news is, the billboards in this Huffington Post feature are outstanding. The bad news? The HuffPo introduces the hilarity with a misplaced modifier.

When jetting down the highway advertisers only have seconds to catch your eye and keep your interest. We're pretty sure these billboards did just that. Also, they made us laugh.

We're pretty sure the advertisers work in offices. Doing anything but driving on the highway is discouraged.

Check out the billboards, though.
Posted by Martha Brockenbrough at 3:39 PM No comments:

This does not make us smile. It makes us weep. 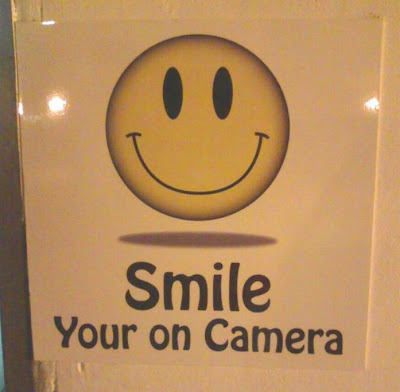 Thanks to Bryan S. for the photo.
Posted by Martha Brockenbrough at 12:49 PM 1 comment:

This comes from the BBC site. What's with the quotation marks?


Hijacked tanker's captain 'dies'
Pirate attacks continue despite the presence of naval forces The captain of a ship seized earlier this week off the Seychelles has died of gunshot wounds he suffered during the hijacking, Somali pirates say.

The quotation marks here make it seem as though he faked his death. If it's unclear, attribute it--even in the headline--to the pirates making the claim. Otherwise, the effect is terribly insensitive.
Posted by Martha Brockenbrough at 8:07 AM No comments:

Twice in two days we've come across an incorrect use of the verb "coin." Today's misuse appeared in Maureen Dowd's column.

To coin a phrase or word means to invent it.

Sarah Palin did NOT coin the phrase "bass-ackwards." The spoonerism has been around for years. For years! Let's not give Palin any more credit than she deserves. Feel free to interpret that as you will.
Posted by Martha Brockenbrough at 7:54 AM 4 comments:

Finally, spam that isn't about penis enlargement. Instead, this one's about...cats (you thought we were going to say pussies, didn't you?).

SPOGG was amused enough that we are holding a contest. The person who rewrites this e-mail most persuasively (and grammatically) wins an autographed copy of THINGS THAT MAKE US [SIC]. Please post your revision in the comments section. When we have a respectable amount of replies, we will judge.

Do you need help understanding your feline?

Improve your own life by helping your cat improve their life.

Cats are smarter than dogs. You can't get eight cats to pull a sled through snow…

Problem cat behaviours ~ UGH! We’ve all had them and we all need to know how to remedy them! In Cat Secrets Revealed, a Texan cat trainer opens up the understanding and strategies that can transform an antisocial wildcat into a lovable housecat in less than two weeks!


Cat Secrets Revealed is a simple step-by-step guide that will teach you to change the behaviour of your cat. The techniques are based on the knowledge of the feline psyche.

Only when you understand your cat’s behaviour, are you able to change it.

Don’t despair – Help is at hand – click on the link to find out more – this could change your lives – don’t delay, click today – you’ll be so glad you decided to take action.

Labels: contest, grammar for spammers, Things That Make Us Sic 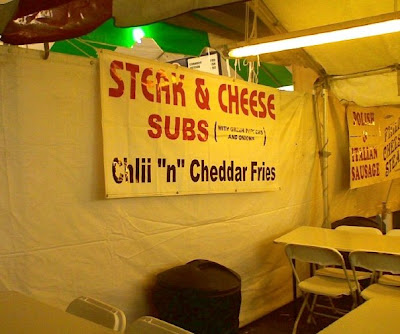 Posted by Martha Brockenbrough at 7:15 AM 4 comments:

Maybe the third time will be the charm. 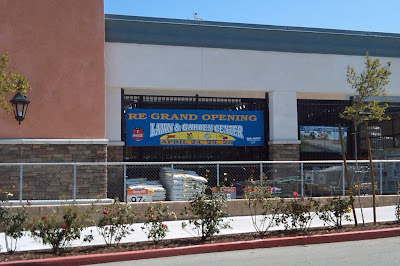 Thanks to Emily in L.A. for the photo.

Posted by Martha Brockenbrough at 1:28 PM No comments:

Spamouflage: The practice of disguising your junk mail as desirable mail from your company (like, making it look like it's in response to an order you placed).

Thanks to Barry L. for sending it.
Posted by Martha Brockenbrough at 6:14 PM No comments:

How to Use an Apostrophe

If you are wearing pants, this will charm them right off of you. We're sorry about that.

How to use an apostrophe: the flowchart. Click the link for the whole darned thing. Posted by Martha Brockenbrough at 9:46 AM 5 comments: