Remember that scene from The Princess Bride, where Inigo Montoya tells Vizzini, "You keep using that word. I don't think it means what you think it means"?

And Carole Radziwill of Glamour stands accused of dropping a Vizzini into her column:

CNN's Anderson Cooper became a broadcasting star last year by diving headfirst into two big stories, the tsunami in Asia and Hurricane Katrina. But he's not just adept at natural disasters—on his show, Anderson Cooper 360°, he also tackles genocide, famine and war, all with (let's face facts) the bluest eyes in the business. Carole Radziwill joins Cooper at one of his favorite restaurants to celebrate the recent publication of his memoir, Dispatches From the Edge, and discuss his barometric rise. 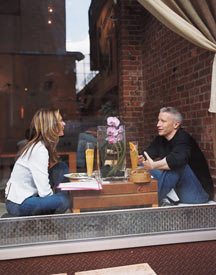 Barometric? A barometer is a device used to measure air pressure. No matter how hard we tried, we couldn't gauge her meaning. Was she saying he owed his stardom to hot air? Or to high-pressure situations?

Of course, it's entirely possible she meant to use the cliche "meteoric," which in this context means swift. But surely this Kennedy relative is swift enough to know a cliche isn't a good way to start a new column -- especially if she doesn't quite, um, hit the nail on the head.

Posted by Martha Brockenbrough at 8:30 PM