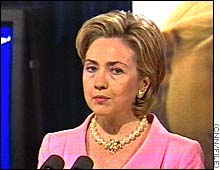 After telling an audience that young people today “think work is a four-letter word,” Sen. Hillary Rodham Clinton said she apologized to her daughter.

How does she spell it? As though she's IM'ing Bill? How lng u wrk tnite? Shd I ordr pza?

If it says anything about young people today that they can spell and count better than the likes of Hillary, then we're suddenly hopeful for the future of the United States.
Posted by Martha Brockenbrough at 8:05 AM