Between Denise Richards and Charlie Sheen 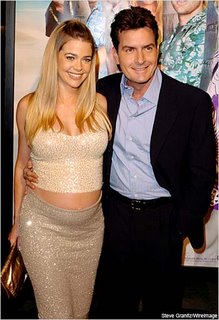 Ms. Richards and her attorneys are prevented from discussing settlement negotiations between she and Mr. Sheen. She did, however, make every effort to resolve her differences with Mr. Sheen prior to filing her court documents, and, at the same time, provide assurances for her safety and the safety of the minor children."

If only she would have considered the safety of grammar when she hired her attorney. That "she" should be a "her."

While we're on the topic, we're on Heather Locklear's side in the battle for custody of Richie Sambora. Heather would have made a much better Bond girl.
Posted by Martha Brockenbrough at 10:13 PM