Two movies that excite us opened this weekend, A Scanner Darkly and Pirates of the Caribbean: Dead Man's Chest.

A Scanner Darkly is based on the Philip K. Dick tale about a narc who's having an identity crisis. Though SPOGG tends to pay particular attention to movies that are based on books, what has us excited is the animation technique, called rotoscoping. (Click here for a definition.)

This is one of those words that isn't yet in conventional dictionaries, but we predict will become familiar to the masses because it looks so darned cool. (Check out the trailers.)

Pirates is of interest to SPOGG, not only because of Johnny Depp, whom we've loved since "21 Jump Street," but also because of the pronunciation of Caribbean. (See trailers.)

We heard our local NPR critic say, "cuh-RIB-be-an." And yet, we say "care-ub-BE-an," and have ever since we first visited Disneyland and its fantastic ride in 1976.

So which is correct?

The talking dictionary at Encarta says we are, though lists as a secondary pronunciation the one our NPR guy used. (Hear it.)

Our policy is to go with the first pronunciation listed, so we are doing a small superiority dance in the privacy of our own home, which is the only place our family allows us to dance. 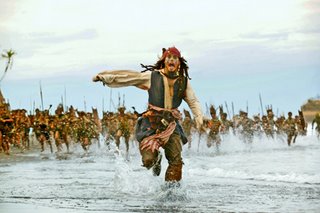 Posted by Martha Brockenbrough at 2:11 PM