We got a sinking feeling today when we read this AP story:

NEW YORK - TV viewers must have taken to the beach: It was the least-watched week in recorded history for the four biggest broadcast networks.

CBS, ABC, NBC and Fox averaged 20.8 million viewers during the average prime-time minute last week, according to Nielsen Media Research. That sunk below the previous record of 21.5 million, set during the last week of July in 2005.

It should be sank. That's the correct past-tense form.

Words like "sunk," "hung," and "shrunk" are past participles. We'll step right around that stinky pile of jargon, though, and say that a past participle is a verb that you use when you're talking about an action that's been completed. A clue is the presence of a helping verb, such as was, or has. 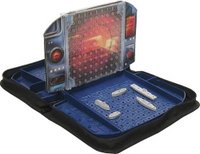 Posted by Martha Brockenbrough at 7:44 PM