Bill G. sends this along from the Washington Post's Web site: 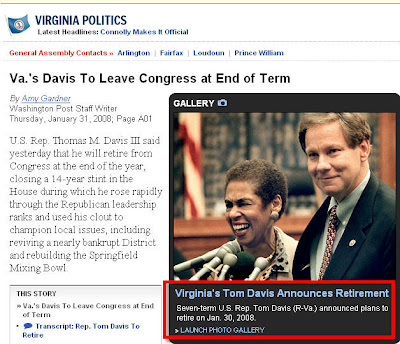 "The article reports that U.S. Rep. Thomas M. Davis III announced on Jan. 30 that he will retire from Congress at the end of the year," Bill writes. "The caption on the photo does a poor job of conveying this to the reader and it would likely lead the reader to draw the wrong conclusion. The caption says, 'Seven-term U.S. Rep. Tom Davis (R-Va.) announced plans to retire on Jan. 30, 2008.'"

Indeed. It'd be a little bit stilted, but the caption should have read: "Seven-term U.S. Rep. Tom Davis (R-VA) announced on Jan. 30 his plans to retire at the end of the year." And then he should have asked the woman standing next to him why she looked so happy about that news.
Posted by Martha Brockenbrough at 3:59 PM