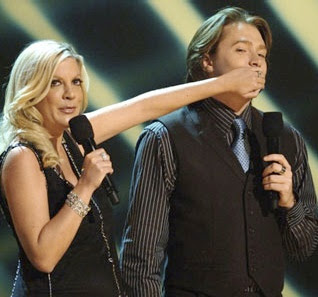 First, this bit from Tori Spelling's blog, in which she describes the party after a wedding she performed:

We had amazing Martini’s (thank you Krol Vodka) that we named after the couples favorite Broadway musicals.

Note the two-for-one apostrophe catastrophe. Martinis, which does not need one, has one; couple's, which needed one, does not. It's a good thing her last name isn't Grammar, or we'd demand a refund.

Even more amusing, though, are the antics of Clay Aiken's foot, which apparently naps on its own schedule when not lodged in his mouth:

“While sleeping on a plane over the weekend, my foot evidently found a home on the arm rest of the passenger seated directly in front of me. I didn’t realize I was causing the woman any distress until she woke me up with a quick hit to the chest. [AS OPPOSED TO THOSE SLOW HITS THE REST OF US KNOW AND LOVE?] Unfortunately, being that this [OR BECAUSE... YOUR CALL, CLAY] happened on a plane, the FBI was called in to investigate and eventually we were all sent on our way. I’d like to thank everyone for their concern; I am fine and have taken steps to prevent any foot wandering in the future.”

This is inadvertently brilliant writing.
Taken steps to prevent foot wandering: Is this physically possible? Is it a deep paradox representing some unspoken conflict in his nature? And shouldn't it have been hyphenated? The answer to that is clear: Yes!
Posted by Martha Brockenbrough at 5:01 PM