To learn a language, a child must learn a set of all-purpose rules, such as “a sentence can be formed by combining a subject, a verb and an object” that can be used in an infinite number of ways. A new study shows that by the age of seven months, human infants are on the lookout for abstract rules – and that they know the best place to look for such abstractions is in human speech.

In a series of experiments appearing in the May issue of Psychological Science, a journal of the Association for Psychological Science, Gary Marcus and co-authors Keith Fernandes and Scott Johnson at New York University exposed infants to abstractly structured sequences that consisted of either speech syllables or nonspeech sounds.

And we know just what babies should wear when practicing their parts of speech: 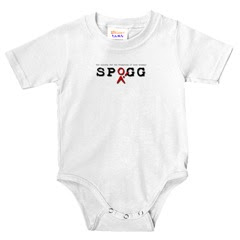 Posted by Martha Brockenbrough at 11:59 AM