It's been a week for misspellings and dangling participles, the two bad clowns of the printed world.

"Archaeologists announce find at supposed QAR site," we find the following fascinating flub: "Made of brass or bronze, conservators will be able to clean the bell much more quickly than the iron cannons that can take years to ready for display, Welsh said."

Please note that the headline in the paper was capitalized exactly as shown above. And, for your information, the QAR is the Queen Anne's Revenge, a ship that the pirate Blackbeard captured and then made into his personal ship.

We are guessing here that the conservators themselves are not made of brass or bronze (or at least not entirely so, if they should happen to be the sort of people who sport a brass pair down there).

Is it perhaps the bell that is brass? If so, the author is a ding-a-ling, and should have written this: "Conservators will be able to clean the brass or bronze bell much more quickly than the iron cannons, which could take years to be ready for display, Welsh said."

The following gem came from a Slate story called "The Secret Life of James Bond." Apparently, this life is much more secret than we could have imagined, no matter how many times we watched him ravage Octopussy on those satin sheets:

Bond's attitude toward women cannot be called misogyny, exactly. It's more that Bond views them with a disturbingly elegant detachment. Bond's reaction to the bodacious Vesper Lynd: "As a woman, he wanted to sleep with her, but only when the job had been done."

Forget the easily polished brass pair we always assumed Bond possessed. He's actually a woman, and a lesbian at that. To quote our small round-headed friends on South Park, "niiiice!" 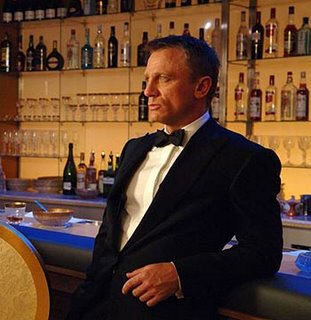 Posted by Martha Brockenbrough at 8:43 AM