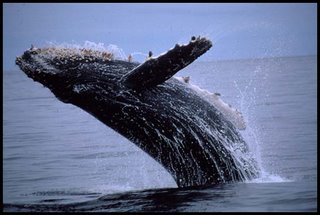 We never suspected this back in the late '80s, when we were relaxing to the "Songs and Sounds of Humpback Whales" CD we bought in the bargain bin at the college bookstore.

Male humpbacks use grammar in love songs
www.chinaview.cn
2006-11-28 10:08:01
BEIJING, Nov. 28 (Xinhuanet) -- Scientists have found that not only do male humpback whales sing love songs, they use grammar. And they have a larger vocabulary than previously thought.

Scientists had previously known of a very narrow range of sounds involved in humpback communication. These include calls associated with hunting for fish and long complex songs from male humpbacks linked with mating.

"The most surprising thing was there were 35 different types of sounds found. We were expecting less (fewer!) than 10," said researcher Rebecca Dunlop at the University of Queensland in Australia.

Dunlop and colleagues monitored humpback sounds and activity from land as the whales migrated along the east coast of Australia from breeding grounds inside the Great Barrier Reef to feeding grounds in the Antarctic.

The underwater sounds they recorded included "thwops," "wops," "grumbles," "snorts," "cries," and what are likely underwater blows similar to surface spouting. Surface sounds include those when breaching or repeated slaps of the tail or fins.

The scientists discovered these sounds appeared to have a variety of social uses including to help mothers and calves stay in contact, or as competitive calls among large groups of adults. The whale calls might also be be specific to one sex.

Some sounds are only used by males for social interactions, especially when single males joined females. This could mean the song units are the key sexual signals in the male songs as opposed to song length or loudness, as is the case in some bird species, the researchers said.

Research earlier this year found humpback whales to use grammar in their love songs.

Interestingly, the new study found that a number of sounds were made by lone animals. This suggests their use is not limited to social interactions.
This research could help understand the impact noise from ships and other manmade sounds have on whales.

"This noise is increasing in the ocean," Dunlop said. "We don't know how this will affect individuals and populations of whales without first knowing how they communicate in a relatively 'noise-free' environment."

Posted by Martha Brockenbrough at 6:18 PM

Labels: grammar in the wild