A Fox in the Doghouse

Is Fox Sports the un-SPOGGiest in the land?

We're afraid so. Below, please find our evidence:

FOXSports.com has learned that the Seahawks QB is scheduled to undergo an MRI today for an injury in his left hand during Monday night's game.

The verdict: This sentence is gets a red flag for being confusing. It should be recast like so:

FOXSports.com has learned that the Seahawks QB is scheduled to undergo an MRI today for an injury to his left hand he received during Monday night's game.

"Burdick said Jackson obtained the handgun he is accused of firing lawfully and informed officials in Indiana of his probationary status in Michigan while applying for permits."

Did he fire the gun lawfully? Who knows? We rather suspect he obtained it legally, and fired it while crazy drunk. But we would never say such a thing out loud.

"Paul Casey's ace - the fifth in Ryder Cup history - closed out a 5-and-4 romp for he and David Howell over Stewart Cink and Zach Johnson, part of a dominating afternoon in which Europe expanded its lead to 10-6."

The ultimate piece for our collection, though, is one submitted by our husband. Please note the spelling of "surrender." To us, that really says it all -- at least when it comes to their copy editors' state of mind. 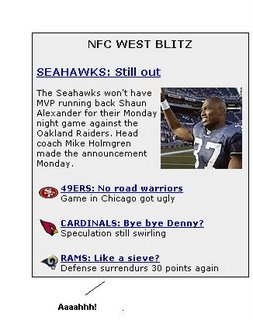 Posted by Martha Brockenbrough at 11:04 AM