Here's proof that the universe has a sense of fair play.

Ashton Kutcher may have Milk-Dud eyes and the hips of a Greek god, but he can't spell. Next time you're envious of his career, his lustrous hairline, or his lusty relationship with Demi Moore, tell yourself this: "At least I know how to spell 'predator.'" What's more, you probably also know how the shift key works on your computer.

From his MySpace (We have put errors in bold type):

boys dream: today I fullfilled a life-long dream. I got the chance to say “are you ready for some football” for the monday night game (NO vs atl.) it was unbelievable.

btw. there’s a thing on dateline about internet preditors that is just creeping me the hell out. I don’t know what we can do to stop this but something has to be done. PLEASE don’t engage and meet strangers you meet on the internet. AND DON’T GIVE AWAY YOUR INFO TO PEOPLE YOU DON’T KNOW.

posers: just so you all know this is the only sight I’m involved with. I don’t want anyone to get scammed by some other sucker that preys on peoples generosity. I have compassion for there loneliness but don’t want people to be fooled where there is charity involved. Just did a mad tour of talk shows. I have fun on them but they are tough. Had a blast with Conan. He’s such a good guy. if you’ve never seen his show, give it a crack. He’s really funny. we had a funny exchange about “man package” and closet beverages. He rocks. 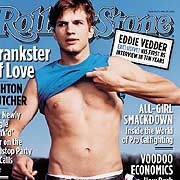 Posted by Martha Brockenbrough at 11:33 AM