Give a Band a Bone

A band that headlined a fair last weekend is accused of masquerading as the rock group Redbone, whose hits included the 1970s song "Come and Get Your Love."

The band at the Butte-Silver Bow Fair performed under the name Redbone, but the real Redbone was playing in Wisconsin, said Ron Kurtz, Redbone's manager.

"I've been in the business for 40 years, and I've never ran into anything this blatant," Kurtz said Thursday from his office in Burbank, Calif. He said the fair board was conned.

It should be "I've never run into anything this blatant.

But really, are we surprised at the bad grammar of a band that pens lyrics like this? 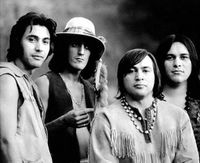 Posted by Martha Brockenbrough at 10:35 AM