Over the last couple of days, the media have reported rather breathlessly the conclusion that IM does not destroy teenagers' grammar skills. Now, the spin is that using instant messaging might actually help:

Linguistics researchers at the University of Toronto have discovered that new communication technologies such as instant messaging and SMS are actually
helping teenagers develop their spelling and grammar skills.

Teens are showing their ability to use a mastery of both formal and informal language when chatting online or via a cell phone.

“What these kids are doing is showing us that they have a really good command of the English language, so much so that I was really blown away by how fluidly they operate,” commented linguistics professor, Sali Tagliamonte, of the University of Toronto. “[Parents] might as well worry about who those kids are talking to, not how they are saying what they are saying.”

In our other guise, SPOGG reported something similar several years ago, not backed up with science, of course, but with something equally useful: common sense.

You'd never say a teenager who'd become fluent in German was running the risk of ruining his English grammar. You'd be impressed he could keep the rules straight in more than one language. Internet shortcuts are a little like that. As long as they're used in the right context, they're a good thing.

Here's to any technology that gets kids writing to each other, and here's to teenagers, for once again proving themselves not as mush-brained as grownups think. 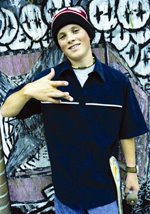 Posted by Martha Brockenbrough at 7:41 AM