Tom Cruise and Paramount Pictures have split up. Here's what Viacom honcho Sumner Redstone had to say about it.

"It's nothing to do with his acting ability, he's a terrific actor. But we don't think that someone who effectuates creative suicide and costs the company revenue should be on the lot."

SPOGG had to look up "effectuate." Frankly, it sounded made up. But it's not. It means "to accomplish."

To us, however, this word choice sounds affected. To put it opaquely, Redstone has effectuated an affectation.

It's not that we don't like the occasional $25 word. We do. We really do, especially when it means exactly what one is trying to say, when no other word comes close. But when there is a perfectly good poor man's alternative that means the same thing, why not use it? "Committed" would have done nicely here.

Perhaps this is why Hollywood people make so much money — it's the only way they can afford their pompous vocabularies. The media dogfight feels like risky business to us. It's far and away from the best way to determine who will be top gun. (And yes, we have to stop watching Tom Cruise movies.) 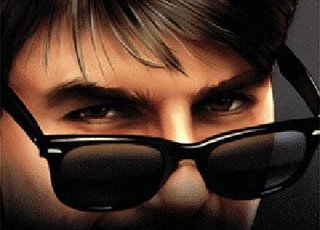 Posted by Martha Brockenbrough at 8:41 AM