The Difference One Letter Makes 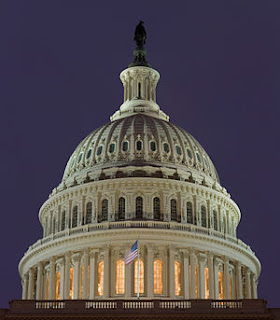 Sometimes, a spelling error is an ethical violation (or an opportunity to weasel out of one). Check it out:

Rep. Tom Tancredo of Colorado has come up with a novel way to try to boost his very long-shot hopes for the 2008 Republican presidential nomination.

He is offering a reward to anybody who brings 25 people to the Iowa straw poll in Ames on Aug. 11 -- including an all-expenses-paid trip to Washington and a tour of the Capitol.

One problem: A tour of the Capitol would violate House ethics rules which prohibits the building's use for political purposes.

The pitch should have said that guests would be taken on a tour of the capital -- with an "a" -- city. That would include the same tour of the Capitol -- with an "o" -- building that is available to any member of the public.

"I did intend it to mean the nation's capital," she said.

Posted by Martha Brockenbrough at 8:57 AM