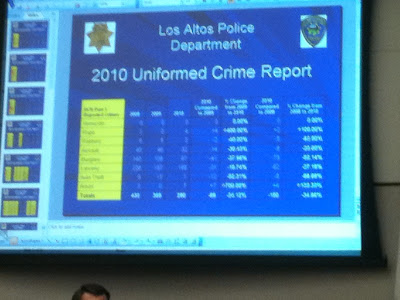 Jim F. sends this photo along from the Los Altos City Council meeting. While "uniformed crime report" makes it sound a bit like evil deeds committed by men and women in uniform, it's a typo. They meant "uniform" crime report.

As typos go, it could have been worse. Or from where we sit, better. We'd definitely like to have heard about "unformed" crimes--you know, those half-baked plots where someone in a Nixon mask decides to rob a convenience store and leaves his wallet behind, and the getaway driver forgets to put gas in the tank so they run out just as they're speeding past the police station? Yeah. That kind. Maybe next time.
Posted by Martha Brockenbrough at 6:57 AM

I would like to see a report on Uninformed Crimes.